Bill Stroud walks the halls of BSGE with the swagger of a man come home. He’s stopped every few feet by people excited to see him, much like Nick Jones walking through a horde of love struck tweens. After a quick conversation about his two sons, Bill moves on to the next colleague desperate for a “hello.”
“[I’m] undeserving of the attention I get,” the founder and former principal of BSGE humbly admits. BSGE however, doesn’t agree. “If it wasn’t for Bill you and I wouldn’t be having this conversation,” college counselor and community organizer, Peter Wilson rightfully notes.
And not only former colleagues idolize Bill. When asked what she thinks of him, senior Monae Dudley, who still remembers the school’s early days at Wagner High, says, “I love Bill, [he] was the greatest.” Monae adds, “His dream was everyone’s dream.”
“Bill could sell sand to a man living in the desert,” says Peter Wilson later adding that “he makes you believe because of his passion.” Inspiring people is certainly not a struggle for Bill.
Apparently neither is basketball.
At the student-teacher game last year the teachers “beat the students, that was number one and two, Bill scored half the points we made and I think he just turned 50,” boasts humanities teacher Aly Lakhaney.
But Bill adds that his real strength is his interest in creating, researching and analyzing ideas to help “fulfill our mission as a school.”
Bill explains that “our responsibility in public schools is to think about what it means for the students to grow up to be powerful adult citizens and foster experiences to build that socially and intellectually,” and this concept inspired BSGE’s mission. He concedes that public education fails to teach students to use their minds, adding that if it did there would have been a “mass resistance and outcry” earlier on in Bush’s presidency. He says that “if [the public school system] did we would have a society where people were much more thoughtful about their own civic duties, their own actions in the community, their expectations of what the government does, what local government does, what the state and national governments do and would have a sense of participation in a much more democratic society.” 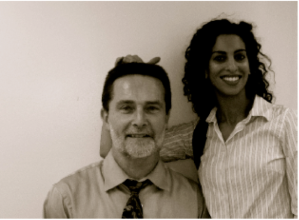 Though he isn’t involved in the school enough to know the details, he gets the impression “that there’s lots and lots of good things happening here,” from feedback and also because a third of last year’s class got the IB diploma; a great feat for a relatively new school. He happily admits, “the school became a much more powerful place than I had hoped to imagine.”
He says he was motivated to create a school because they play a role in how people use their minds and how communities create democratic societies. He reveals that he believes, unlike adults, teenagers are curious, open and difficult rather than “jaded and callous” and that he therefore felt a high school would be the best medium for his inspiration.
When asked how long it took to get an entire school up and running he replies, “less than two years.” No wink or smile to recognize the absurdity of that last statement. Bill Stroud seems to see no rarity in his ability to turn an idea into a school in the time it takes some to plan a wedding. Super-school-founder Bill’s kryptonite? Bureaucratic details. He insists that they’re only good for “help[ing] you fulfill your mission as a school.”
Much of the BSGE culture was established by Bill, consciously or subconsciously. Many teachers, for example, are on a first name basis with their students. Our school is generally relaxed, calm and comforting and adults and students are friends, all undoubtedly cultivated and encouraged by Bill’s image and mission.
Right now Bill is busy taking his culture and ideas and bringing them to the rest of New York City. He is working as a Network Leader, in charge of a group of schools in one of the boroughs. He admits that his stress since leaving has surprisingly increased, mainly because he doesn’t believe in the current driving force behind education. He says that the “high stakes accountability system” currently in place does not result in progress.
He believes that the system warps motives making education about “attending to skill development narrowly defined within some range of academic competencies that we’re measuring by each student and highlighting and defining ways that you score better as a classroom teacher.” Soon classroom teachers will be evaluated on “how well their students do on state tests, never once do we address issues of racism, sexism… and what we are paying attention to as a larger district,” and then Bill added that “the degree to which any school is not paying attention to those most fundamental issues is the degree to which they need to rethink to what they’re doing and what their responsibility to the world is.”
Bill admits that his time “here was the most gratifying work personally and professionally that I’ve ever been involved with.”  Coming back reminds him of how much he misses being here but “when you leave some place you love, you have to let go,” Bill says and then compares BSGE to letting his sons follow their own path. He says leaving was hard and then breaks out into song. “…don’t know what you got till it’s gone, pave paradise put up a parking lot.”

Interested in winning big? Write for the 2020 John Sexton Essay Contest! Submit your response to the prompt on the post by June 1st, 2021 11:59 pm. For more information, check out @riseforrohingya
“We don’t make keys, but we do make difference!” Join the BSGE Key Club, a global service organization that helps members learn how to build character. In partnership with their local Kiwanis club, students make an impact as they positively serve others in their schools and communities. The Key Club aims to establish an inclusive and progressive environment, where together, everyone develops good work ethics and leadership skills.
don’t forget to to send in your recipes for the bsge virtual cook book! all the info is on the flyer so make sure to send them in to participate :) 💛🤍💙