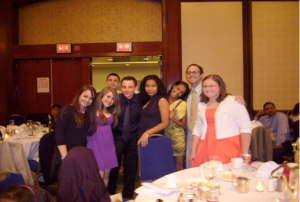 A flurry of words, a drop of sweat and, when the dust settles, left standing are the “BSGE Beasts.” “It’s physically exhausting,” says Nathan Nikolic, first year debater, about the Saturday tournaments.
After only five years of competing, BSGE is the number one team in Brooklyn and Queens and, according to debate coach Mr. Mark Wolov, “as far as New York City is concerned we probably have the number three team after Bronx Science and Beacon.” “People all over NYC know the name Baccaluareate because they’ve competed against us,” adds Mr. Wolov proudly, in fact, just a few weeks ago, partners Shira Almeleh and Erika Tannor placed in the top 16 in the nation.”
Shira admits that her favorite thing about debate is having the last say, “I love being able to give the last speech of the round.” Erika agreed and said that it’s an adrenaline rush to be the only person that everyone is listening to. “There’s so much energy in the room,” Nathan added.
For many debaters the culture and the people that come with the “sport” are the draw. At tournaments different teams interact and debaters build a network of friends. Marcelo Jimenez says he stayed in debate because of those friends and because of the “times I have with my friends at away tournaments, in hotels just having fun.”
And apparently, while being fun, it’s a life changing experience. “It really became my life,” says Shira, not only in the amount of work she has to do but also because “it changed the way I think and it changed the way I approach situations.” Marcelo even admits that if it weren’t for debate he wouldn’t really care “about reading or telling people my ideas” and Shira adds, “before debate I didn’t consider myself an educated, politically aware human being” and Erika agrees that it changed her view of the world. According to Erika it’s been a huge confidence boost, “I joined because I was a very quiet student in class but I always had a lot to say.” Debate was the push that forced her to speak her mind.
“People who are not open minded will have a hard time accepting the types of arguments we encounter,” Shira insists, “the great thing about debate is that people are able to defend positions that [they] agree with and others that [they] find morally corrupt.”
So when asked to defend the position that a spoon is better than a fork, perhaps not morally corrupt but still surprisingly interesting, they had to think. Marcelo then pointed out that the “crazy thing about debate” is that he wouldn’t even have to convince me that the spoon trumps the fork but rather only that he shouldn’t have to “defend that position.” Erika, however, did point out that the spoon wins because its shape is “more versatile” and it cannot be used as a weapon. Many prisoners might disagree.
“The interesting thing about the format of debate is that it’s not really about if the spoon is good or bad. There are separate components to the idea of a spoon,” says Erika. Shira adds, “what’s interesting is that it always comes down to impacts. Someone would argue” that if spoons don’t win forks would be used for violence and this could end the world. The judge would then have to determine whether this impact outweighs the impact of sayings spoons are good. Spoons will never look the same again.
The BSGE Beasts compete in the New York Urban Debate League, which is paid for, and run by the IMPACT Coalition, an organization that has helped over 100 different debate teams. Over the years they’ve paid for everything from tournament fees, hotel and transportation costs and even meals. The debate team has even gone on all expense paid trips to Harvard University, Albany and Wisconsin.
The funding for the Coalition, however, has dried up because of the economy. And they’ve been forced to implement a $6,000 team membership fee “which is a lot of money,” admits Mr.Wolov, “but for the support they provide it’s definitely worth it.”
The debate team is asking for help from the BSGE community and you can start by buying a cookie. There will be many bake sales and students can help out by purchasing something. Parents who are interested can also donate money to debate fund through the PTA by earmarking the donation. Students interning at the IMPACT offices or volunteering to serve breakfast and lunch at a tournament and BSGE hosting a tournament would all offset some of the costs.
If you would like to support debate or join next year please speak to Mr. Mark Wolov.

The BaccRag needs your help! With online learning it has been difficult for our writers to conduct interviews. Submit your response today! Click the first link in our @linktr.ee in our bio 🤍💛💙
find the application in your bsge emails!
Have any photos of your younger days in BSGE? Send them to our Yearbook Committee ( @bsgeunscripted ) via email! 📸