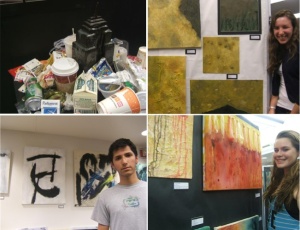 April 22 was BSGE’s fifth annual IB Art show. 11th Grade SL and 12th grade HL students showcased their works in the library from 5-7PM. The artists discussed their art with the many parents, teachers, students and friends who attended. Paintings, sculptures, photos, and more lined the walls and hallways, and each piece was original and unique.
This year’s art show did not feature the usual auction of student-produced art. This year pieces were still sold, the art department taking 30% of the profit. According to Mr. McGuire, the auction takes a lot of energy and the small number of students makes it difficult to pull off. This year, art was still sold, although not in an auction.
Art students were interviewed by IB Art grading officials. Students must answer questions about the colors, styles, and technique- decisions made about their art. A few artists were tense about their interviews, even those who will not be presenting at the IB art show until next year. An anonymous 11th grade HL student commented that she was ‘scared’, and that she knew it was “going to be hard, especially the interview”.
Kristen Spang, an 11th grade SL student, chose the theme of abortion. She aimed to raise awareness about abortion and have people think about abortion in “, a bigger frame than a baby’s right to live” .In her works she used a variety of mediums including photo transfer and paint. Several were mixed medium. One of her pieces featured a crudely drawn, childish depiction of a stork. Attached to the beak of the stork was a condom filled with red paint. A few paintings showed statistics, a white dot among five red to symbolize ‘one in five’. Her art got viewers to think not only of an unborn baby as a helpless fetus, but of who this baby could become, and if they would affect the world positive or negatively.  Her works, although unconventional, gave people a different view on abortion than is usually exhibited in our society.
Another artist, 12th grade Christina Rukki, chose pollution and litter in NYC as her theme. One of her works included a ceramic sculpture of the empire state building. However, rather than your typical New Yorker, the bottom of the mini skyscraper was surrounded by mounds of trash-from Dunkin’ Donuts coffee cups to yogurt cups.  Her piece, titled ——, was meant to show the effects of littering in New York City. “…People need to start caring or else it [the Empire State Building] will be completely covered in garbage.” As for where she got all the trash for her piece, she collected junk around the house. Who knew garbage could make such statement?
Parents and guests were excited to see friends and family members’ artworks. Two parents said that they were happy to see the art scene while the students got into money and business. Others felt that some of the meanings behind the artists’ works were difficult to understand, but that the artist statements helped. Overall, this year’s IB Art show was a complete success.

Happy Valentine’s Day from The BaccRag to you! 🥰💕🎂
Happy Lunar New Year to all those who celebrate! Hope this upcoming year is filled with success and prosperity 🎇 🧧💙💛🤍
With Valentine’s Day right around the corner, the Snail Mail Club has set up a letter exchange for the school! Check your emails for more details and fill out the Google Form if you want to participate!