This was the third consecutive year BSGE hosted Lounge Night in the cafeteria. This year however, there was an added bonus of outside performers to mix up the set list and a temporary stage. For most of the night, the audience got to enjoy discovering the talent of numerous students from our school, with veteran bands Panama Red and We Live Alone also making a much anticipated appearance.
Students host fund raising events such as Lounge Night to make events like prom and graduation more affordable down the line. During these tough economic times, every bit earned helps.  This senior class has set record breaking numbers in fund raisers, twice! The trick? Thinking outside the box; for example, with Lounge Night.
Co-organizer of the event, Amalia Carusone, member of senior council, attests first hand that events like this do not appear by themselves.  “A lot went into organizing Lounge Night.” Even though it lasted only one night, the students prepared for months, as the senior council allocated jobs to every member, even recruiting some juniors.  During the event, students could be seen scurrying through the hallway, as they gathered people and materials. 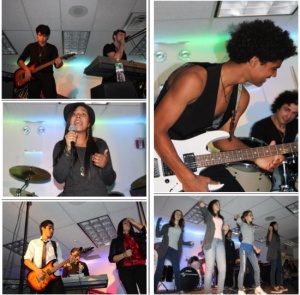 Stephanie Aristakesian, for example, in twelfth grade, was in charge of managing the backstage, or the area stretching from the general office to Peter’s office, that was sectioned off. Other members of the council held a list which dictated only a strict list of names allowed to enter. A jumbled mass of performers were the main components filling that space, with Stephanie organizing them rapidly when their performance slots came up.
With so much going on, Catherine Pena, a solo performer, admitted, “I cried before I performed. I was so nervous. I thought it went well, though, and a lot of people said that I did well.” seventh grade performer, Marika Cygert, grew to enjoy the spotlight as well, saying, “It felt good to be up there, I wasn’t scared because I got to show people what I do best.”
It is no wonder performers would get nervous, with over 250 people, it can seem like a wide audience. Last year, Lounge Night grossed $1,800, this year it was up to $2,700. Jolijt Tamanaha said, “What made Lounge Night so successful was that a lot of people put a lot of effort in. It was a school-wide effort.”