On Friday May 30th, the Junior and Senior Council co-hosted BSGE’s last party of the year: IB Done. The party’s name was a play on words with BSGE’s International Baccalaureate (IB) Program name, as most of BSGE’s past parties have been like. The party had a summer theme, a party tributed to the end of IB Exams of 2014 for Juniors and Seniors. But the party “IB Done” could also be interpreted for underclassmen as an end of the year party celebrating the conclusion of stressful assignments, teachers and classes.

This was the first time in BSGE history in which a party was hosted by two grades. The reason behind this is that for every BSGE party, money comes out of the school’s pocket in order to pay for security guards and chaperones for the party. Because of the recent budget cuts for schools, the Junior and Senior Councils were told that they had a limited amount of parties. Instead of fighting to the death for one of the party dates, the two councils came together and decided to split the work involved in hosting the party and also split the profits.

Katie Donohue 15’, a Junior Council member, commented on the coalition: “It was definitely interesting to work with the Seniors for the party. The good part was that there was less work we had to do, especially since Juniors were all busy with their final exams.” She continued, “But it was also difficult because you have to communicate with a larger group of people.”

Overall the party was a success. IB Done lasted from 6-10 in the evening, with music provided by DJ Sanity, an up and coming club DJ that has worked for BSGE parties in the past. There were colorful lights, decorations and drinks that created a fun and welcoming vibe.

However in the second hour of the party, there was a technical difficulty with the speakers that caused the music to sound muffled. But once chaperone Virge Ramos came to the rescue, the party returned to its lively energy.

Lauren Ouakanine 14’, a member of the Senior Council said, “This party was a little sentimental for me. It’s a little sad that this was my last BSGE party, now that I’m going to Parsons in the Fall. However it was also a celebratory occasion now that everything is over and summer is here.” She added, “Overall it was a fun night to spend with friends.” 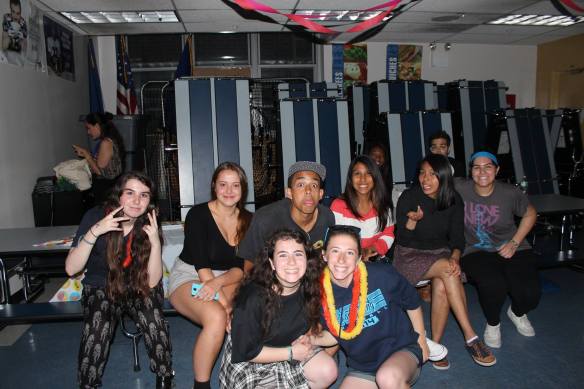