On October 23rd, 2014 it was announced that emergency room doctor Craig Spencer, 33, who returned to New York City after treating Ebola patients in West Africa, was tested positive for the Ebola virus. This is the first case of Ebola in NYC and the fourth case in the United States.

Unsurprisingly, New Yorkers reacted with great fear after hearing news that Spencer traveled to The Gutter bowling alley in Williamsburg, The Meatball Shop restaurant in Chelsea, Manhattan’s Highline Park and took the A, L and 1 train after developing symptoms for the virus. Despite evidence showing that Ebola is not an airborne virus, many residents of New York, including BSGE students, have become extremely cautious of contact with people who may be ill. 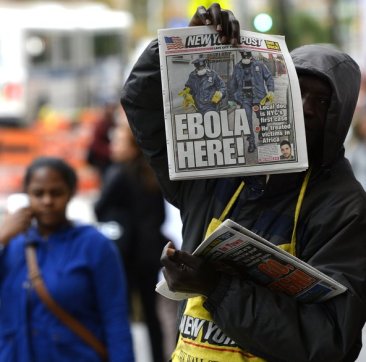 But it is not only New Yorkers who have taken extreme precautions after the recent Ebola outbreak. New York Governor Andrew Cuomo and New Jersey governor Chris Christie imposed a policy on Friday, October 24th stating that all healthcare workers returning from West Africa after treating Ebola patients should be put it in a mandatory 21-day quarantine.

While some praise the actions of these Governors, others feel that Cuomo and Christie should have consulted the city first before making such a rash decision. A prime example of this disapproval is nurse Kaci Hickox who was quarantined for three days in New Jersey from Friday, October 24th after returning from Sierra Leone to treat Ebola patients. Despite testing negative twice for Ebola, Hickox was confined until October 27th.

The nurse and many others were deeply offended by Christie’s actions. She commented in an interview with BBC, “”I am not going to sit around and be bullied around by politicians and be forced to stay in my home when I am not a risk to the American public.”

The federal Centers for Disease and Control and Prevention in Atlanta, Georgia were also upset with the decision. According to one of the Center’s officials, this policy is compromising because it discourages American nurses and physicians to go to countries affected with Ebola to help out.

For those who are unfamiliar with the Ebola virus, also known as the Ebola haemorrhagic fever, it is a severe, often fatal illness that was first discovered in 1976 in Zaire, which is now the Democratic Republic of the Congo. As of October 19th, 2014 the Ebola virus has taken the lives of 4,877 people, according to CNN, with Liberia being the hardest country hit with 2,705 deaths and 4,665 cases.

Scientists hypothesize that the disease was derived from fruit bats and is transmitted through direct contact of body fluids such as blood, saliva, sweat, feces, vomit and semen. Many people do not feel the symptoms of the virus until one to two weeks after they have been infected with it. Ebola starts off with a minor headache or fever similar to the flu but worsens as time passes. It can lead to the point where a person is internally and externally bleeding and has trouble breathing.

So far, according to the World Health Organization there is no specific treatment or vaccine for Ebola, and the fatality rate can reach up to 90%. This is where BSGE comes in to help raise money so that researchers could find a possible cure for the Ebola virus.

Mr. Anderson’s 7th grade advisory collected $400 in total by just going around BSGE and asking for donations. The advisory sent the money to the Direct Relief Foundation.

When asked why it is important that BSGE students raise money to find a cure for Ebola, Mr. Anderson said,  “It’s important because we all live in this world together. We have to help people in West Africa because we are fortunate enough to have a lot of medical equipment and attention that can be offered to others.” He explained, “Just because Ebola may not be as big of an issue as it is in, say Liberia, does not mean it’s not our problem.”

According to Mr. Anderson, these West African countries affected by Ebola do not have as great medical facilities as the US, so everyone, including BSGE students can help by donating money. Mr. Anderson added, “It’s part of the IB statement to care about the community. It’s good to affect change even if it’s in small amounts, because our mission is to help others.”

Have any photos of your younger days in BSGE? Send them to our Yearbook Committee ( @bsgeunscripted ) via email! 📸
🚨 NEW CLUB ALERT 🚨 @bsgeclimatecardinals is an upcoming club in BSGE! Check out the link in their bio
Check out @hyacinthcollection ! For more information check the link in their bio! 🎨🎭🏳️‍🌈