Title of the Artwork: Disintegration

1) What is this piece depicting? What was your inspiration?

My artwork is a sculpture comprised of two parts. The first section depicts a human skeleton on bare

soil, having its bones chomped apart by a series of three centipedes. The longest of the trio has a man-

like head. Behind the skeleton’s skull lies the second portion, which consists of a looming vulture

standing in a nest of overflowing flora. I came to this bizarre idea by linking human concepts to

animalistic, disgusting imagery. Being that my IB Art theme is “The Costs of Our Decisions,” I wanted

of irony. What better “vile” organisms to convey this than the centipede and vulture?

2) What materials did you use to create this piece? What is the significance of these materials?

As with my other sculptural works, I used a range of media here. The base surface was two panels of

burlap, as burlap takes anything from drilled holes to glued soil without complaints. This makes it great

for mixed media. The skeleton and joints of the centipedes were built from air-drying clay. Because both

are so geometrical and not particularly thick, clay was suitable for 3-D detailing and weight distribution.

Specifically regarding the claws and teeth of the centipedes, I cut uneven metal strips in order to add

sharp, malicious textures. But for the vulture, my initial choice in materials was not so adequate. I

started with making a wire frame and added layers of aid-drying clay afterwards. Sadly, the black

feathers did not stick to the clay as well as I had hoped. I ended up adding thin papier-mache strips on top

of the clay in order to more confidently adhere the feathers to the body. Looking back, going with papier-

mache from the onset would have saved time and aggravation.

3) Is there anything that you want point out, or explain specifically about the art?

The impression I want my piece to have on viewers is confusion and discomfort. Observers, ideally,

should first be drawn in because of how visually ridiculous the whole situation seems. Then, at the more

symbolic level, I offer a deconstruction of the human condition. The centipedes may look pitiful,

deranged, and immoral in their savage breakdown of the skeleton, but what makes us so much different?

Much like our perception of centipedes, humanity itself is driven largely by ceaseless, brutal self-

indulgence – to the point where nothing really remains within ourselves. This is the type of bare

emptiness I wanted to capture in the first half of my imagery. However, I also enjoy leaving some room

for interpretation. The vulture is actively trying to resist temptation, literally looking down upon the

lowly centipedes. But then, one must ask: is the vulture happy? Not quite! I deliberately made the

vulture seem insane with its crazed eyes and delusional nest overflowing with moss, indicating how

resisting our desires comes with its own set of consequences. 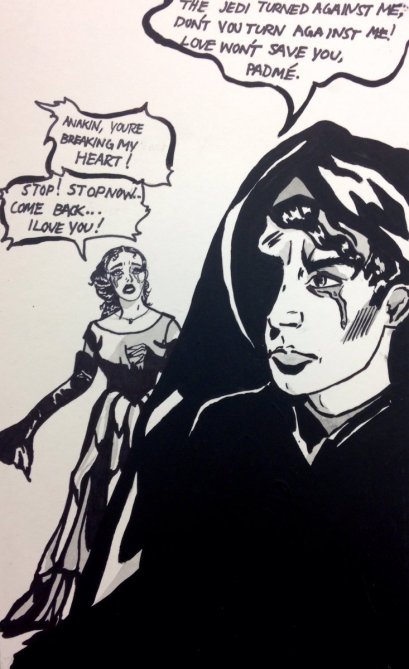 1. What is this piece depicting? What was your inspiration?

As IB artists we are guided into finding themes to center our portfolio around, and I chose to depict the

consequences of human emotion through Star Wars imagery. My inspiration for these works came from a

comic series called “The Secrets of Love? Marriage” from the 1960’s as well as “Drowning Girl” by Roy

2. What materials did you use to create this piece? What is the significance of these materials?

In IB art, use of a variety of media is heavily encouraged so for this piece I experimented with india ink.

Ink is traditionally used for the high contrast, black and white comics so it is essential to use ink and

3. Is there anything that you want point out, or explain specifically about the art?

In this artwork, and throughout my pieces I take images of scenes from Star War movies; and in this one I

chose Padme and Anakin in the scene of their marriage. The art intends to separate this scene from the

greater body of work and ridicule it or at least alienate this form of expression. Also that’s why I chose

separate panels instead of one continuous panel.

Have any photos of your younger days in BSGE? Send them to our Yearbook Committee ( @bsgeunscripted ) via email! 📸
🚨 NEW CLUB ALERT 🚨 @bsgeclimatecardinals is an upcoming club in BSGE! Check out the link in their bio
Check out @hyacinthcollection ! For more information check the link in their bio! 🎨🎭🏳️‍🌈