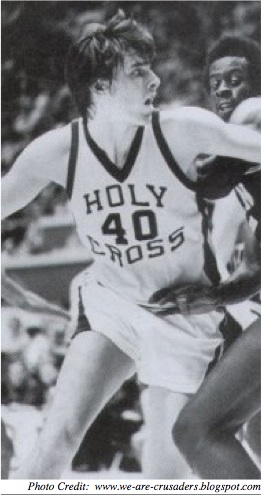 The BACC Rag will repost an old article or interview (from our archive of almost a thousand stories!) each Thursday to help share great stories from the past that would still resound today.

First things first: who offered you scholarships to come play for their schools?
No that many in the end . . . I whittled down the schools that I was not interested in and that were actively recruiting me . . . Holy Cross, Fordham, North Carolina.  I was recruited, although they don’t offer scholarships, by both Princeton and Brown.

A few of those names definitely stick out—so why Holy Cross?
I had an interest in going to Holy Cross before the whole recruiting process started.  When it came right down it, I thought I might as well use the scholarship opportunity to go to a school I really want to go to anyway.

You are certainly a tall man at 6’4”, but players today are even bigger. How do you think the game has changed over the years?
When I look at the current game, I just see, physically, the differences in terms of body building . . . When I played, the general body type was very tall and thin.  You have to be so much stronger today; in the 70s that wasn’t a requirement.

Today’s game is full of athleticism—ever had the privilege of dunking on somebody?
In college I only dunked the ball once, and that was on a fast break.  I wasn’t a great leaper to begin with . . . But I’ve never felt the humiliation of having someone dunk on me.

What was your most memorable moment in college?
When I was a junior, Holy Cross was in theECAC (Eastern College Athletic Conference).  The New England region held a tournament each year, and the winner moved on to the NCAA tournament.  At the end of the year we won the regional, and I hit what was basically the game-winning shot.

Drafted in the 5th round by the Atlanta Hawks; how did it feel to have your name called?
I was assuming for it to happen; it was just a matter of what round.  It wasn’t the primary focus in my life at the time.  I had worked so hard on basketball in college, but I never really saw myself as an NBA player.  I was more interested in literature and the arts at the time.

You were in the same draft class as Larry Bird.  Looking back, is it surreal at all?
I was aware of it, but at the time I had never heard of him . . . I wasn’t a fan of college basketball while I was playing.  I really didn’t follow it that closely; I just didn’t enjoy watching.

Is there anything that you would have done differently? Do you miss it?
No, I really don’t, and I pretty much stopped playing after getting back from Europe [after being drafted].  I just let it go totally.

Fast forwarding a bit, as our girls’ basketball coach, what is your fundamental coaching style?
We’re very fortunate to have a lot of dedicated and experienced players.  Obviously we have some limitations, we run more basic offensive and defensive systems.  Our talented players allow us to compete without such a strict degree of organization.

How has your career in its entirety influenced the way you coach now?
In college, I played on a squad that was very team-oriented, with no single superstar or anything.  And to a certain degree, so did the demeanor of my college coach—who was not overly emotional or a hot head.  I think I’m similar on the court.

Do you have a favorite drill at practice?
It would have to be the three-man, full court weave.  It has benefits in all areas: it improves conditioning, passing, and helps with understanding court position.

Just one more: when can we anticipate a comeback?
[Laughs] Right after a couple knee replacements.