Avengers: Age of Ultron is a superhero film based on the Avengers team from Marvel Comics. The comics are produced by Marvel Studios and distributed by Walt Disney Studios Motion Pictures. The movie is the sequel to Marvel’s The Avengers from 2012 and the eleventh movie in the Marvel Cinematic Universe. The movie was created and directed by Joss Whedon and has a cast that includes Robert Downey, Jr. as Iron Man, Chris Hemsworth as Thor, Mark Ruffalo as Hulk, Chris Evans as Captain America, Scarlett Johansson as Black Widow, Jeremy Renner as Hawkeye (Clint Barton), Aaron Taylor-Johnson as Quicksilver, and Elizabeth Olsen as Scarlet Witch. The movie also has James Spader as Ultron, Samuel L. Jackson as Nick Fury, Paul Bettany as Vision, Cobie Smulders as Maria Hill, Tom Hiddleston as Loki, Stellan Skarsgård as Erik Selvig, and Don Cheadle as Colonel James Rhodes. In Avengers: Age of Ultron, the Avengers must work together to defeat Ultron, a technological enemy wanting human extinction. 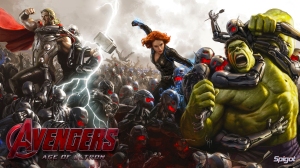 After the successful release of the first Avengers movie in May 2012, the sequel was announced. By the time Whedon had completed the first draft of the script, it was April 2013. In June, casting began to take place starting with the re-signing of Downey. Some filming started in February 2014 in South Africa with principal photography taking place between March and August 2014. The film was mostly shot at Shepperton Studios in Surrey, with some scenes filmed in Italy, South Korea, Bangladesh, New York, and various locations around England.

Matthew Olfino ’19, a comic book lover said that the trailer “was very ominous and looked like a horror film because of how the music’s tone was a bit creepy.” He liked the villain’s entrance within the trailer, and how “it has his deep voice being the narrator that becomes more human as the trailer goes on.” Olfino added, “I’m most excited about the X-Men and the Hulk Buster, which is something that I’ve been waiting for to be revealed sometime. I feel like it’s going to be destroyed somehow at the end of the movie.” However, the BSGE student also spoke about additions to the movie that he was not crazy about. He says, “The love story between Hulk and Black Widow. That’s just uhhhh.”

As a pessimist, Olfindo also explained that “Captain America’s probably going to die. I feel like Captain America or Iron Man are going to be killed off since they’ve been around for a long time. They’re two of the most well known characters in the cinematic universe, so I guess. And with Captain America’s shield breaking in half and Iron Man’s armor always getting destroyed, I feel like there’s no coming back for them.”

Going along the lines of Olfindo, Shanizea Husain ’19 said that “Clintasha is real” and that “no one likes the Hulk and Black Widow together because that’s gross. They’re not meant for each other and that was a pretty bad way of introducing it to us so I don’t ship it,” referring to the love story between Hulk and Black Widow, versus Clintasha, Hawk Eye and Black Widow.

Andrew Park ’19 said that what he’s excited for is the possible end credits where “Stan Lee acts as a janitor and he walks in and he lifts Thor’s hammer and sweeps under it. It’s great.”

The BSGE 8th grader also said that what he enjoys about Marvel the most is “the cartoonesque, light hearted aspect that hits so close to home on the comics. The new Avengers movie looks great because the costumes are nearly identical to the way they are perceived on paper.” He continues, “The trailers and posters indicate that they will be bringing the new Hulk buster armor into the new Marvel Universe, which is very awesome. It’s one of the first movies to introduce the third phase of the Marvel Cinematic Universe.”

Park discussed his analysis of the movie further, stating that it “is a good way to combine two different aspects of the Marvel Universe on film. They have the X-Men, the mutants, then they have the Avengers and you know combining them is a good idea. And they added Spider Man to the Marvel Cinematic Universe, so he might show up.”

Helen Tran ’20 took a new idea for why she’s excited for the movie. “I think this movie will be interesting because of the fact that Ultron was created by Tony Stark. He wanted to create Ultron for good purposes but it ended up being the antagonist in the story.”

Tran also stated what she would not be looking forward to in the new Avengers movie. “What I kind of didn’t like was the fact that this is a movie where the enemy is technology that was made for good but ended up attempting to dominate the world, which is a bit cliche.”

Don’t miss the Chipotle fundraiser for @bsgekiddoburrito to help feed the children! 💙💛🤍
Stay safe and check out: https://www.covidtests.gov 💙💛🤍
Check out the BSGE Spirit Store💙💛🤍!