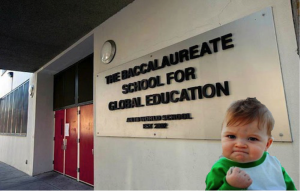 Recently, BSGE was ranked the #5 high school in New York State and #28 in the country. U.S. News & World Report, the famous American media company that ranked our school, is the oldest and best-known ranking of academic institutions. This time, High School of American Studies at Lehman College made it to the #1 high school in New York State, while the School for the Gifted and Talented in Dallas, Texas has been named the #1 high school in America for the fourth year in a row.

“I am happy for our students and our family,” says Ms. Johnson about our new ranking. Each year, the rankings given by the U.S. News Report are based on the college readiness of the graduating class from two years ago. This year, our school’s rankings came from statistics of the 2013-2014 school year. This “college readiness” score tries to calculate how well schools prepare their students for college based on their performance on IB or AP tests. In addition, these rankings include how well “disadvantaged students” perform in the school among other factors. Jessica Koziol, a BSGE alumni who graduated from 2013, said: “I’m really glad to see that allthe hard work of the class of 2013 is being acknowledged.”

BSGE has consistently ranked among the top 50 schools on the US News list though it dropped out of that list in last year’s rankings. In 2012, it was ranked #1 in the state and #21 in America. Our place as one of the nation’s best high schools has made many of our students proud. “It’s definitely an accomplishment, seeing that our school has been founded rather recently. It even ranked higher than the schools that have been around for a century,” said Adam Oubaita, ‘19. Others, like Ridwan Waseef ‘19, have high hopes for the future of our school. Ridwan said, “We have been ranked high before, but we bounced back from last year’s defeat to come back and show the other schools that hey, we didn’t fall out and we’re still in there, we’re still in the race to be the #1 school.”

Below is a link to the full US News Page

Eid Mubarak to everyone who is celebrating today! Hoping you had a great time with family and friends! 💙💛🤍
Happy 4th of July! Love Baccrag 💙💛🤍 #baccrag #bsge #ib #gosting #🐝
it’s been a blast seniors💙💛🤍