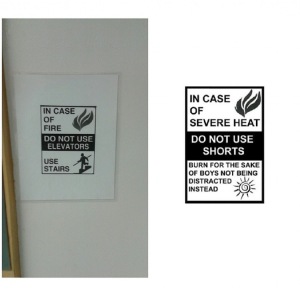 You are walking down the hallway, trying to avoid the daily traffic congestion. You see the same posters from last week: another advisory bake sale, blood donation, club to eventually join… and a poster about shorts? Recently, BSGE’s walls have been adorned with posters mimicking the nature of the “In case of fire, do not use elevators, use stairs” sign by the elevators. Instead of advocating for fire safety, however, the poster states, “In case of severe heat, do not use shorts, burn for the sake of boys not being distracted instead.” The posters appear to be making a statement against the dress code in terms of the length of females’ shorts. Several copies have been taped to the hallway walls, girls’ bathroom mirrors and stalls, as well as the staircases. Four BSGE students were interviewed and chose to remain anonymous. They all agreed that the dress code being based off of the concept that “boys will be boys” is ridiculous and sexist. However, there were some discrepancies in their opinions on Tanksy and their posters. Some students described the posters as “courageous,” “striking,” and “a battle for student justice.” Whereas others agreed that the cause was just, but felt that the means were a bit “disrespectful” to “the people who are setting us up for our future education and lives.”

There is an ambiguity in the future of the BSGE dress code and infamous act of “gym-shorting.” One student optimistically believes that the posters are the “beginning of a new change at BSGE.” Another states that they will help students and faculty find a “middle ground between a professional atmosphere and sufficient freedom.” Whereas another student believes that the posters have “set up a negative dynamic between the student and faculty so that it will be more difficult to change the rules.”

Even though the opinions vary, everyone can agree on one question: who is the person behind these sudden posters? The BaccRag has traced the mysterious entity to a group under the alias “Tanksy,” and has interviewed them via their Instagram page, @tanksynyc.

The description is: “TANKSY: the official movement against dress code & other issues at BSGE. group based. BANKSY + TANKTOPS = TANKSY. interested in supporting the movement? DM us!”

What inspired you to make the posters?

I have to say, as the summer season approached and more of my female classmates were “caught” for wearing shorts, I began to ask myself: why? In essence, shorts are not really doing much. They are just wrapped around a female’s limbs. Though it is true that they are admittedly wrapped around less limb than other garments, what is so particularly demeaning about the skin left uncovered? Why was it decided that there must be rules and regulations for tiny slips of skin? The entire genital area is covered. As I searched for an answer from many adults, the general consensus was the same: rules are rules, and as a teenager, I wouldn’t be able to understand. There is no reasoning behind the rule’s’ existence in the first place. Thus, I undertook the task of parodying the poster by the elevator.

What was your goal in making them?

This movement was very spontaneous, so I can’t say that I had a big plan for it. However, I knew I wanted to communicate my opinion to a larger group of people; to not keep it in my head or in private conversations with my friends. As I went on, I came to realize that not only was my goal to communicate my personal thoughts, but to unify a body of people under a cohesive idea which would serve the community. We want change.

What is the essence of the Tanksy movement? How would you define it?

For the purposes of this interview, the original Tanksy has thus far been responding using the first person. But to make this clear, there is more than one person. The essence of Tanky is a group of people that stands in solidarity with females harmed by unequal clothing restrictions. Tanksy exists to unify and promote change. We extend further than the dress code; we eist to promote consensual sexual actions, denounce slutshaming and gender stereotyping, and advocate for rape victims of all genders. For now, we exist as an undercover organization within BSGE that wants to start a movement.

What are your future endeavors in terms of the dress code?

To a degree, future endeavors are confidential due to shock value playing a major role in most of the events planned for next year. Generally, we’re going for a lot of publicity. Our goal is to stop the blatantly sexist dress code policy by exposing it in its rawest form the the BSGE student body. That is all.

Do you have a message for the BSGE community?

Our message would simply be: get involved. If you identify as a girl this affects you. If you identify as a boy this affects you. Gym shorting/dress code incidents, within this school and other schools, aren’t isolated in the slightest; they belong to a larger system of institutionalized inequality. We are all responsible if we want to see it change.