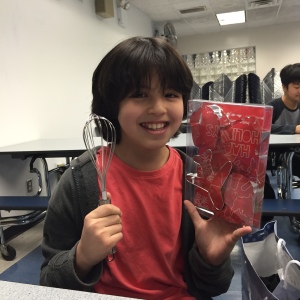 A TV celebrity roams the narrow hallways of BSGE and his name is Josh Reisner ’21. Josh was a finalist in the competitive television show “MasterChef Junior.” A temporary home to the top 16 young chefs in America, MasterChef Junior features desperate culinary battles for a chance to win a prize of $100,000. Josh, aged ten at the time, made his mark in the competition during Season 2. With skills rivaling those of professional adults, Josh worked hard, made friends, and learned much more about cooking. During an interview, he spoke about his experiences on the show and his plans for the future.

Q: How was your experience at MasterChef?

A: I liked the filming process as well as the experiences I had after it was over. It made me to like cooking more and realize that it is something that I am passionate about.

Q: How did you become interested in cooking/culinary art?

A: There was a cooking place near my house. I had a birthday party there when I was six years old. I had so much fun that day and decided that cooking was definitely something that I wanted to pursue. I’ve been cooking ever since.

Q: What made you decide to go on the show?

A: At first, I didn’t want to go on the show at all because kids from the previous seasons told me how much pressure and stress it involved. I was afraid of the judges and other contestants being mean. However, after giving it some thought, I decided that it was worth a shot and would be a great opportunity. I auditioned and made it through.

Q: How did you audition for a role and get on the show?

A: There were a few auditions/interviews to see what my cooking skills were like along with what kind of personality I had. It was all extremely stressful.

Q: How long did auditioning and filming last?

A: It went from about January to late April. I stayed in LA from late March to early April to film. I missed school for about three weeks but I was assigned a tutor in LA to help me with the school work I was missing. At the time, I was in the fifth grade and missed a day of the New York State ELA Exam due to filming. The first episode aired in November of 2014.

Q: What did your friends think about the show?

A: They had mixed feelings about me being on television but overall they thought it was pretty cool.

Q: How far did you get in the competition?

Q: Do you plan on going to culinary school in the future?

A: No, I want to go to an Ivy League college but I will continue to cook. In the future, I would like to own or manage a restaurant.

A: I avoid ingredients that are trending. I love cooking dishes with ramen. I tend to eat it around 4 times a week because I love it so much.

Q: How often do you cook?

A: I cook dinner for my family four nights a week.

find the application in your bsge emails!
Have any photos of your younger days in BSGE? Send them to our Yearbook Committee ( @bsgeunscripted ) via email! 📸
🚨 NEW CLUB ALERT 🚨 @bsgeclimatecardinals is an upcoming club in BSGE! Check out the link in their bio