During spring break, a group of BSGE students and teachers embarked on a trip to China, which was our school’s first trip to a country in Asia. This year, the school decided to give an opportunity to students interested in Chinese culture and language to experience the country firsthand. The group consisted of 23 students and 4 teachers—Ms. Mihalache, Ms. Silva, Mr. Giraldo, and Ms. Xia. During their 10-day stay in China, they visited a total of three cities: Beijing, Xi’an and Shanghai.

Much of the trip was spent sightseeing and exploring China’s many tourist attractions. The trip began in Beijing after a 13-hour ride on Air China. During their time in Beijing, the group visited famous locations such as Tiananmen Square, the Forbidden City, Jingshan Mountain, Summer Palace, the National Stadium (Bird’s Nest), the Great Wall, and the National Aquatic Center.

Besides visiting famous places, the group also spent some time in local areas, including hutongs, which are narrow streets or alleys common in Beijing. Some students claim that the hutong visit was their favorite part of Beijing because they were able to communicate with the locals living there. They also had the chance to try Peking duck, a famous dish in Beijing with duck meat, scallions and cucumbers rolled into a thin layer of pancake dipped in sweet-bean sauce.

On Day 5, the group traveled to Xi’an in an overnight train, where the students squeezed into bunk beds for the 13 hour journey. In Xi’an, they visited the Terracotta Warriors Museum and walked around the city to experience local life. The next day, everyone flew to Shanghai, the last destination in China. On the first day there, they traveled on a high-speed Shanghai Maglev train and visited local families in residential quarters. The next day, they watched an acrobatic show, visited the Yuyuan Garden, the Jade Buddha Temple, and several other locations. And finally, after ten days in China, the group flew back to New York City from Shanghai. 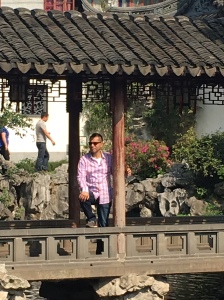 Although the trip was very packed in terms of schedule, the students and teachers were able to experience a variety of different cultural differences. For example, one of the challenges that they faced was getting used to the squat toilets so prevalent in China. However, when asked what she would change about the trip to make it better, junior Elizabeth Levkovich answered, “Nothing.” She believes that it was the entire trip, including the parts that she both liked and disliked, that contributed to her changed impression of China. “I heard a lot of things about China before that I was skeptical about, but I think as with any new place or culture, everything is going to feel different than expected,” she said.

Overall, many students agree that visiting China allowed them to come in contact with a culture other than the one they are so accustomed to. BSGE is excited to continue exploring new countries on future trips abroad!