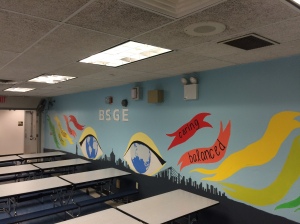 The vast majority of BSGE students eat lunch in the cafeteria, and many spend time there after school for various extracurricular activities. Thus, for a group of five determined seniors, repainting the cafeteria mural seemed like the obvious choice for a CAS group project that would impact the entire school community. Isabelle Lee ‘16, Alvaro Bermejo ‘16, Joly Zakaria ‘16, Akib Rahman ‘16, and Sara Asprilla ‘16 wanted to replace the long-standing mural with a brighter, fresher design. With the supervision and input of the art teachers, Peter Wilson, and Vanessa Rabines, the group put in 20 hours of after-school work over the course of 2 months, sanding and repainting the original mural and creating the new design on the wall.

For graduating senior Isabelle, working on the mural was a way of contributing something to the school she has attended for six years. “I felt like it was my way of leaving a mark on the BSGE community,” she said. She also shared the thinking behind the new design, which includes eyes with globes inside of them in front of a New York City skyline. “I tried to incorporate elements of the IB curriculum. We included the ten IB learner profiles, and blended them with the bee mascot and eyes to symbolize our global perspective here at BSGE.”

Isabelle also stressed how important it was that the project was so accessible to the entire school population. Many students and teachers jumped in to help even if they were not officially signed on to the project. “Being able to participate in something so interactive, and public, was gratifying,” she said. “So many people were involved in this process, sharing their input and discussing designs with us.” Working on the mural was a rewarding process for all the group members, including Alvaro. “For me, the project is a visual representation of what we are all capable of, and how much I’ve enjoyed my time at this school,” he explained. “I’ve embraced BSGE over the past six years and I thought giving back with this mural would be great.”