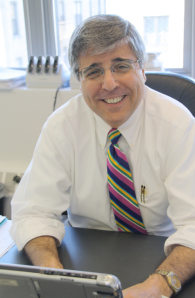 END_OF_DOCUMENT_TOKEN_TO_BE_REPLACED

So we’ve heard that you used to play basketball. Can you tell us a little about that?

Well I grew up in the Bronx and my father was my first basketball coach in the sev­enth and eight grade and he gave me a big head start over a lot of people because he taught us the basic fun­damentals. I worked my way up from being a sub to being an all-state player as a senior and then was fortu­nate enough to get a schol­arship to play college bas­ketball at Holy Cross where I started for four years we had very good teams there and at the end of that I wound up playing in Spain for a year in Madrid for what is there professionally,

What/Who is your favorite thing/person about BSGE?

I just think the stu­dents are so nice, it’s a really great diverse popu­lation, people are very toler­ant of one an­other, respect­ful and I think that goes for everyone, like not just the students, but the faculty as well, like it’s a really neat interaction among all the people here.

Would you say you like NY bet­ter than RI?

Well it’s home for me. You know I married into the state of RI and I really like RI, being down here there are things that I miss about it. When I go take a trip up there..there’s that little sense of homesickness because I lived up there for 24 years. But coming back to NY I feel like I’m really home having grown up in the Bronx.

How many countries or cities have you lived in? You said Spain and RI…

Well, Massachusetts for a couple of years while I was in graduate school. That is pretty much it, really.

And how would you say you got into teaching af­ter having played bball?

END_OF_DOCUMENT_TOKEN_TO_BE_REPLACED

‘Out of sight = out of mind’ is the written foundation for living a carefree, American life. The American life? Well, it is America and its government that has proclaimed this message to all its citizens, telling them that if those prisoners in Guantanamo bay are not escaping or killing guards then why think about them.
Originally set up for American security purposes, Guantanamo bay has

END_OF_DOCUMENT_TOKEN_TO_BE_REPLACED

“Rise and Fall of BSGE:”  Five words that have created a buzz among BSGE’ers; teach­ers, students, secretaries, school aides- even the nurse has had a say on this article. But people agree and disagree all the time, it’s no big deal! Why then, has the previous Op-Ed by a fellow BACCrag writer Daniel Fridman provoked so much rage? Why have his sophisticated prose been the basis of so much controversy? He was only sharing his opinion. “Well,” an anonymous source explains, “Op-ed pieces are opinion articles, but with FACTUAL basis. I mean, where is he getting his facts?”

This previous Op-Ed piece was one that attempted to describe BSGE in its purest forms,

END_OF_DOCUMENT_TOKEN_TO_BE_REPLACED

Megan Coulter, a thirteen year old girl, attends the Mascoutah Middle School in Mascoutah Illinois. It just so happens that a little over three weeks ago she was caught hugging two friends and was sent to two days detention. Megan and her parents were both equally infuriated by this preposterous rule but complied with Megan’s punishment of two days detention. Though no signs of impertinence were recorded the final verdict will be defined by the next board meeting which they plan on attending.

Stumbling upon the article by MSNBC, I was com­pletely awestruck at the

END_OF_DOCUMENT_TOKEN_TO_BE_REPLACED

How preposterous of me to say so. Indeed, this is the message we announce, tattooed on our foreheads with the invisible ink of forgetfulness, as we live on, ignoring the world outside our own. The world in which kids our age, moth­ers, grandmothers, and fathers like ours, are being brutally killed everyday.

Wait, I’m con­fused, what is going on in Darfur? Darfur is a region located in Sudan, Africa’s largest nation in size.  Sudan is large but is still a poor country. It suffers from a process called deser­tification.  People lack water and proper land to grow food on, caus­ing malnutrition for the present population, a problem that has, in its most extreme cases, led to cannibalism. Conse­quently, the economy is not thriving and the government has evaded the real problems. In addition to a weakened country as a whole, the Darfur crisis, located in Darfur in West­ern Sudan, is a great example of the further problems this

END_OF_DOCUMENT_TOKEN_TO_BE_REPLACED

Is it just me, or do you dread being asked what school you go to?
Aunts, uncles, friends, ask you innocuosly, not knowing that this question will take them by the hand and lead them into a further state of bewilderment. You tell them where it is, you tell them that it is ‘The Baccalaureate School for Global Education at least ten times and still, they stare at you, stupefied. So for all of you struggling with this, here it is, this is how you answer them. This school enforces a program that leaves students friendless, overstressed, and addicted to coffee, but it is all worthwhile because teachers say, “It will definitely help you in college!”
On a more serious note, it is generally the highest pre-college education that a

END_OF_DOCUMENT_TOKEN_TO_BE_REPLACED

Yes, they do. They know that you like Michael Jack­son, they know you are pregnant, and they know your boyfriend cheated on you with your mother. How do they know? Well, the truth is that if you’re a Gmail user, Google has the right to all of your e-mails, incoming and outgoing, your address, your state, and lots of other personal information. Clearly peo­ple who create an account with them know this, yet they are utterly unaware of what Google may be doing with the information. They naively trust the world of the networking busi­ness to protect them more fervently than they do their pockets. Thus, this article is