Students departed for Europe on a Thursday, a typical school day. After school ended, students stayed after school with their baggages to take a bus to the airport. Mr. Giraldo said how some of the students looked “so excited and couldn’t wait to go on the trip.” At the airport, the students boarded a flight to Paris, France. The next morning, they arrived at Paris and dropped of their luggage at the hotel. 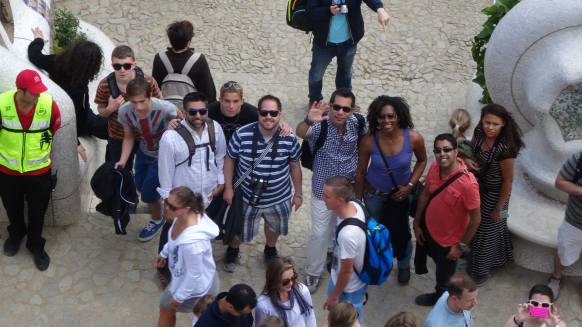 END_OF_DOCUMENT_TOKEN_TO_BE_REPLACED

With the arrival of New York City’s newest mayor, Bill de Blasio, new policies are starting to take effect in NYC public schools.  At the start of his term and even during his mayoral campaign, de Blasio promised to bring major reforms to education in New York City. De Blasio started this off by replacing many held government positions in citywide agencies, which were previously appointed by former mayor Michael Bloomberg. De Blasio makes it clear that he intends to replace many of his predecessor’s policies.

Replacing Dennis Walcott as school chancellor is Carmen Farina, a former New York City schoolteacher. With Farina in charge of the nation’s largest education system, policies consistent with Bloomberg’s administration were generally dismissed. In a press conference, she described her plan through “five C’s and an E.” Through this breakdown she called for collaboration, communication, capacity building, curriculum enhancement, celebration and efficiency within the city’s schools. Farina, following de Blasio’s agenda, opposed the sole use of standardized testing to check student performance.

A decade prior to today, schools based many of their student promotion policies on testing, most notably on state and regents exams taken every year by students. Instead of this

END_OF_DOCUMENT_TOKEN_TO_BE_REPLACED

If you’re an avid watcher of NBC, you may have been wondering why your favorite TV shows were suddenly missing from their usual schedule during the month of February.  February 7th marked the start of the 2014 Winter Olympics in Sochi, Russia. The Winter Olympics, just like the Summer Olympics, are held every four years. The last Winter Olympics were held in 2010 in Vancouver, Canada. This year, Russia won the bid to host the international competition, the first time since 1980, more than 30 years ago. In preparation for the competition, Russia spent over $51 billion in order to modernize their infrastructure and expand their transportation power, becoming the most expensive Olympics hosted in history as of now.  Games were organized in two “clusters,” with ice events hosted in the Sochi Olympic Park. Other events, involving snow and

END_OF_DOCUMENT_TOKEN_TO_BE_REPLACED

This year started off with hordes of snow and  gusts of chilly temperatures in New York City.  Two separate storms hit both the East Coast and Midwest this January, causing widespread issues in and around the tri – state area.

Winter Storm Hercules arrived in New York on January 3rd, however continued its onslaught of snow on to the 4th. The storm arrived not long after NYC public school students returned to classes after winter break. Brutal weather conditions hit many states, causing traffic delays and closures. Extremely large amounts of snow were deposited everywhere throughout the East Coast. Some cities have even reported an astonishing 2 feet of snow collected. Ice on roads and sidewalks posed a safety hazard to commuters, especially the elderly and the young.

END_OF_DOCUMENT_TOKEN_TO_BE_REPLACED

On May 3rd, 10th grade students presented their Personal Projects to an audience of 7th, 8th and 9th graders. The Personal Project was a yearlong assignment that revolved around topics that interested the students and that they chose themselves. Using information they gathered, they were to create a final project that demonstrated their knowledge of their topic. Students were expected to follow a process that included a presentation at the close of the project. Presentations lasted 10-15 minutes and varied greatly depending on the topic. Students in the audience were given packets to complete based on the presentations to help them learn about the experience.

The 10th graders were assigned to develop a presentation since the start of the school year. They focused on a variety of Area of Interactions to guide them throughout the project process, as well as Guiding Questions (GQ).  10th graders began

END_OF_DOCUMENT_TOKEN_TO_BE_REPLACED

Mr. Anderson’s 7th Grade Advisory is hosting another movie night this Friday, afterschool at 3:20 PM.  Since the beginning of the school year, the advisory has hosted numerous bake sales and fundraising events that promote various organizations, including ones sponsored by the school’s Helping Hands Committee. This month, Mr. Anderson’s advisory hopes to contribute money for the ongoing effort to fight the deadly and potentially fatal disease, leukemia.

This week’s movie night showcases the 2012 Marvel film, The Avengers. In early December of last year, the advisory