It’s been a while, but we are delighted to bring you our April 2021 issue, which we are happy to release today, April 1st! 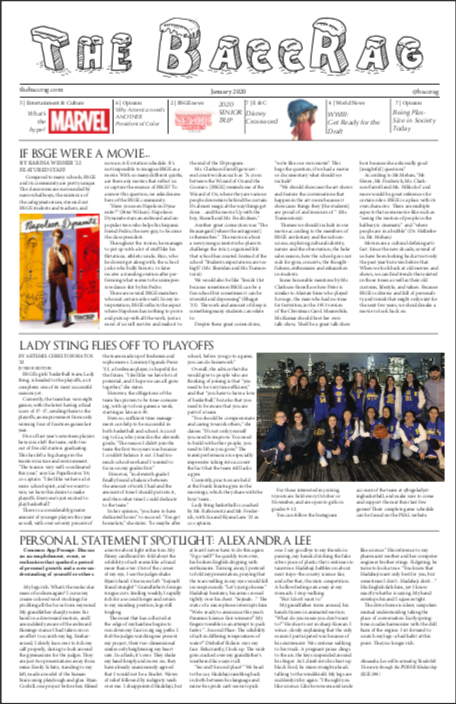 Click here to view the June 2019 issue of the BaccRag! 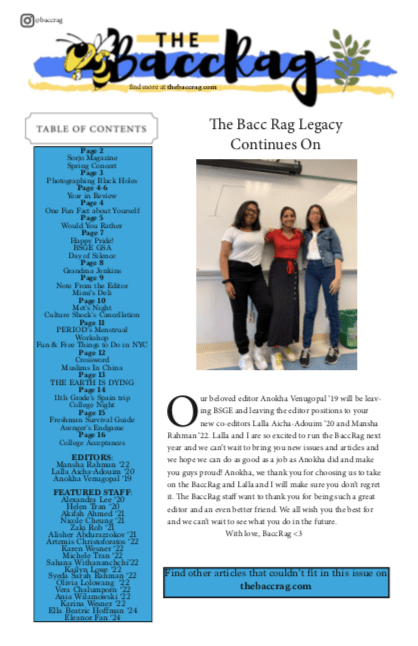 If I could only use one word to describe college, it would be serendipity. From arriving at the campus on move-in day to cramming Sociology vocabulary words at 3 a.m. to going stargazing with my friends in the middle of nowhere, freshman year at Colby College for me has been a roller-coaster of a ride.
My name is Moshan Guo, a rising college sophomore transferring to Columbia University this fall. I call myself a preparer; in the summer before entering college, I tried to prepare the best I could for this upcoming new life by ordering dorm necessities like laundry hampers or looking into classes I was interested in taking. I spent countless nights too excited to sleep because I could not wait to experience being the cool college student without curfew or parents by my side telling me what to do. But I was not prepared for adjusting to college; no one had warned me about it.
I cried through my first semester, homesick and stressed from coursework. I would go to class in the mornings, be the most active participant in class discussions, eat alone in the dining halls and then return to my dorm room, where I spent the remainder of the day doing homework and video-calling my best friend from high school. I had almost no social life on campus and instead tried to devote the rest of my time to extracurriculars like volunteering or visiting professors’ office hours.
But it was also on this lonely, quiet campus that I learned to grow, both academically and spiritually. As editors before me have emphasized, college, even after taking IB classes, is challenging. There were weeks when I would go to Miller Library right after classes to study and return to my dorm after 4 a.m. for only four hours of sleep. Although I found myself aware of what quality of work professors expected from me, living up to their expectations was often stressful. As my social circle expanded, especially since the start of the second semester, I found myself bonding with other students over the common woes we shared. There were plenty of times when several of us would work together on a study guide for Biology or help each other with editing essays for Chinese Feminism class.
The majority of you, like me, will initially find yourselves to be isolated in college. If there is one thing I regret about freshman year, it would be stepping outside of my bubble too late in the year. At one point, everyone around you will seem to be having a great time making new friends and excelling at their coursework, while you are the only one struggling to find friends or do well in class. But I promise you that the majority of the people are also struggling with you. It was only after I opened up to my new friends that I realized like me, everyone else around me was nervous about making friends and facing pressure from coursework. Once I stepped out of my bubble, I started spending a lot less time in my dorm and spent more time with friends, even if it was just studying countless hours together in the library. There were times when we impulsively decided to watch a movie at 1 a.m. despite having class the next day or drive down to Waterville for a quick meal at McDonald’s.
The point is, much of the memorable parts of my freshman year come from time spent with friends. I realized that I could get a lot more work done with the help of fellow classmates, even if it meant having endless distractions or side-conversations here and there. College is a miraculous platform in which you will find people coming from very different backgrounds who still share common interests and worries with you.
Coming back to the city for college for the next three years may be daunting; I will once again have to go through the tasks of finding new friends and integrating myself into the campus community. However, I am determined to make the best out of my experience. Freshman year has indeed allowed me to witness the highs and lows of being a college student. But most importantly, it taught me to persist. 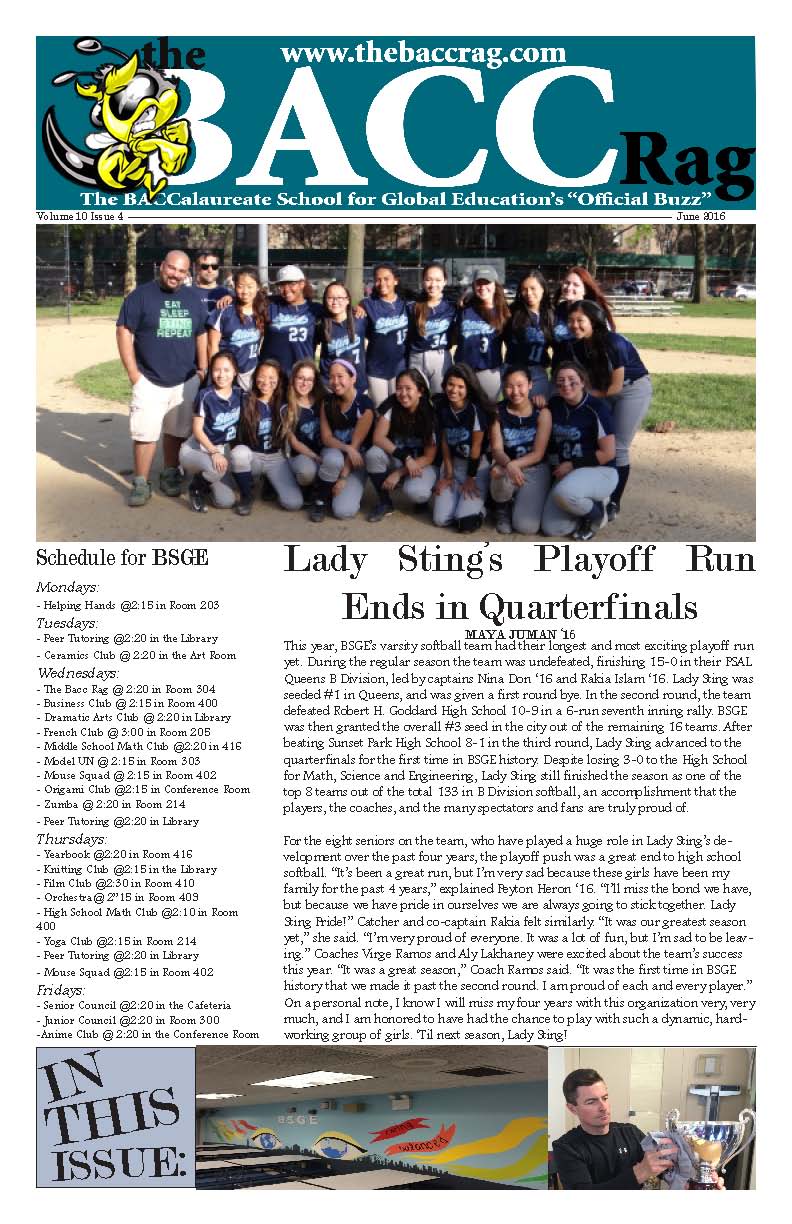 The sixth inning proved decisive as HS for Math Science & Engineering broke a scoreless tie with a three run sixth. Those three runs were all they needed as they held on for a 3-0 in seven innings on Wednesday at Big Bush Field.

Claire Bergerson baffled Math Science & Engineering, striking out seven batters. Bergerson allowed one earned run on three hits and one walk over seven innings but still took the loss, her first of the season.

The game was a scoreless pitchers duel through five innings. Lady Sting Math Science & Engineering didn’t relinquish the lead after scoring three runs in the sixth inning when it scored on an error, a groundout by Hillary Rodriguez, and an RBI single by Taylor Faulds.

Lady Sting had its chances throughout the game, stranding two runners on base in the third and fifth innings. In the fourth inning, third baseman Jaime Carroll was thrown out at home trying to stretch a triple into a home run.

This was Lady Sting’s first loss of the season, finishing 17-1, which knocks them out of the quarter final round of the playoffs. This is the furthest any Lady Sting team has made it into the playoffs. HS for Math Science & Engineering moves on to the semifinal round and will play Scholar’s Academy.

An ace performance by Claire Bergerson hoisted Lady Sting to an 8-1 win in seven innings over Sunset Park on Friday at Big Bush Park in the third round of the B Division Playoffs. (Click here to view the playoff bracket)

The lead stayed with Lady Sting Softball after the first, when it scored three runs on an RBI single by Bergerson and an RBI triple by Costa.

With two outs and Lady Sting trailing by one, Claire Bergersoncame to the plate and doubled, plating Rakia Islam and Nina Don for the win, capping off a six run rally in the bottom of the 7th inning.

Both squads had things going at the plate, tallying 19 runs and 26 hits, including 10 extra base hits.

Goddard brought home two runs in the second inning, taking the lead on a solo homer by Mary Meshanski and single by Schaefer.

Lady Sting tied it up in the bottom of the second Rakia Islam’s second double of the game which plated Marika Cygert.

Lady Sting responded with two runs in the fifth making it 6-4. Lady Sting Softball scored on an RBI single by Amanda Eng and an RBI double by Marika Cygert.

Goddard scored three in the top of the seventh to give them their largest lead of the game, 9-4, which proved not to be enough.

Goddard’s 9-4 lead paved the way for some late inning heroics by Lady Sting who scored two in the bottom of the seventh on a double by Amanda Eng, and scored two more on bases loaded walks to Nina Don and Emily Costa. Those put Lady Sting down by one and set up Claire Bergerson’s game winning two run double to win.

Bergerson recorded the win for Lady Sting Softball even though she allowed nine runs over seven innings. Bergerson struck out seven, walked four and gave up 12 hits.

BSGE Lady Sting, the top seed in the entire Queens B Division bracket, received a first round bye, beat Goddard HS to move on to its third round matchup on Friday at 4pm.

Claire Bergerson hopes every outing could go as well as Thursday, as Bergerson struck out 10 batters to carry Lady Sting to an 8-1 victory over Academy of American Studies at Queensbridge Park in seven innings.

Their first playoff game is schedule for Monday, 5/23.

Emily Costa batted .618 and led the team this year with 8 home runs (7th in PSAL) and 52 RBIs which led all PSAL varsity softball players in New York City.

Nina Don led the team with 37 runs scored and also hit 7 home runs and drove in 35. 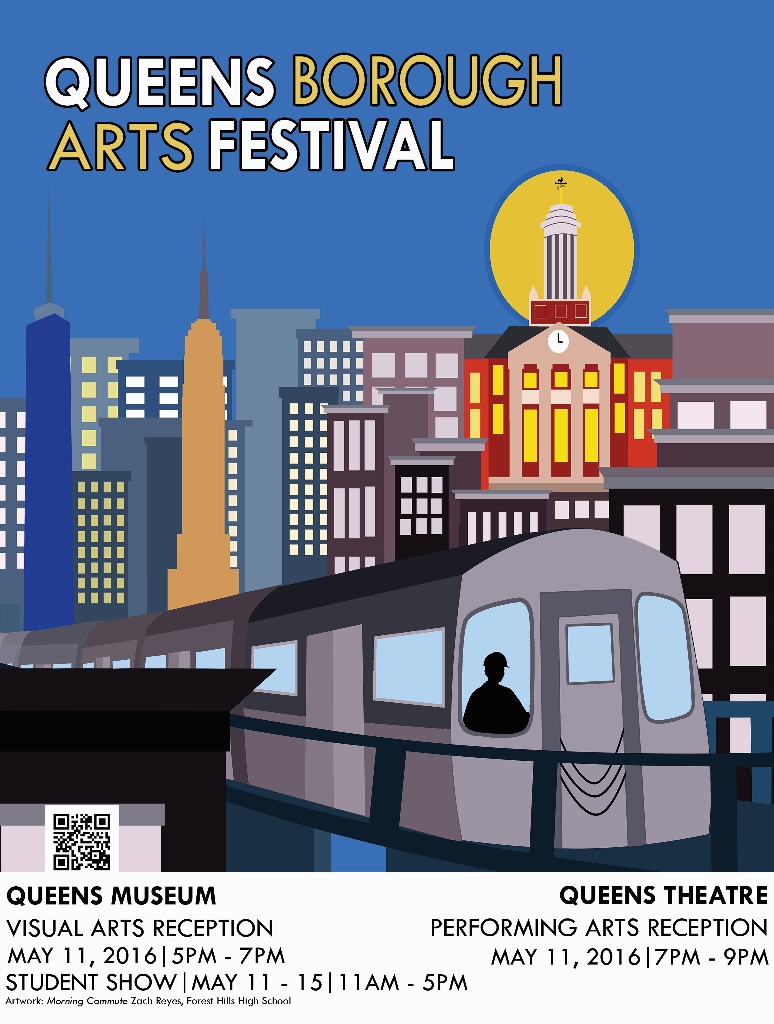 As of yesterday, May 11, 2016 the Queens Museum is exhibiting artwork by K – 12 Queens public school students, as part of the Queens Borough Arts Festival. We are proud to have four BSGE students exhibiting artwork. This is juried exhibition so not all the artwork that is submitted is chosen to be displayed.Two 10th grade students, Annika Cheng and Nadja Martinovic, each exhibited self portrait charcoal drawings, submitted for the exhibit by Mr. Sheridan. Two seniors, Rakia Islam and Isabelle Lee, exhibited assemblage artworks that made use of found objects. The opening reception that took place last night included performances by students at Jamaica Gateway to the Sciences High School, Forest Hills High School, and PS 16 The Nancy DeBenedittis School and PS 115 James J. Ambrose School. This was the second annual arts festival, in which each teacher was invited to submit two artworks each.

The exhibition is open through Sunday, May 15 at the Queens Museum, which is open from 11am – 5pm Wednesday – Sunday (closed Monday and Tuesday). We hope that you can visit the exhibition. Congratulations to Annika, Nadja, Rakia, and Isabelle. (photo credits: Cecelia Cheng)

Seven runs in the first three innings allowed Lady Sting to put the game away early.

Lady Sting piled on five runs in the top of the fifth inning highlighted by a bases loaded triple by Emily Costa.

Don boosted her batting average thanks to a perfect 4-4 day at the plato pace Lady Sting Softball.

With this win, BSGE clinched the division title and remained undefeated.