By Alan Chajet (a 7th grader last year)
You’ve just started a new school. Many worries enter your mind. Will teachers like me? Who will I befriend? Will there be too much homework? Etc.
The Baccalaureate School for Global Education is no exception!
There first few days are rough times for some. For others, there are no worries. Take Kats Tamanaha for example. She says: “I came to BSGE with my old friends and made new ones all together.” On the other hand, I came to this school alone, and had to start from scratch. It wasn’t too hard; all I had to do was get noticed! (Some of you might know what I’m talking about)
Once you start class, you will realize the teachers are ever so slightly awesome. In the

END_OF_DOCUMENT_TOKEN_TO_BE_REPLACED

“She could see New Pretty Town through her open window. The party towers were already lit up, and snakes of burning torches marked flickering pathways through the pleasure gardens. A few hot-air balloons pulled at their tethers against the darkening pink sky, their passengers shooting safety fireworks at other balloons and passing parasailers.” All Tally Youngblood wanted was to be pretty and party in New Pretty Town with every other 16-year-old. Tally’s world is not like anyone else’s. It’s a few centuries after our time, and things have changed. When people turn 16, they get an operation that turns them from ugly to pretty.
When Tally meets a new girl, Shay, while sneaking out of Uglyville, they instantly become

END_OF_DOCUMENT_TOKEN_TO_BE_REPLACED

Imagine yourself
in today’s modern world,
bombarded with visions of
those less fortunate, of those
“starving children,” of those
horrific working conditions
in far away third world countries.
Envision the constant
images that are thrown your
way of the stereotypical
African boy; plagued with
malnutrition complete with
a great view of his ribcage,
and sad, helpless eyes. Think

END_OF_DOCUMENT_TOKEN_TO_BE_REPLACED 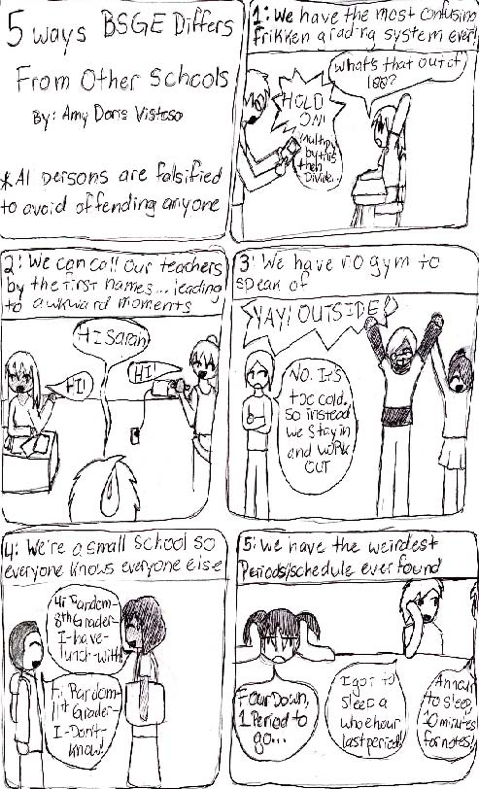 As many of us should know, the United States holds elections every four years. The president is chosen by the people and for the people through a process called voting. To vote you must be 18 or older and must be a U.S. citizen. However, it is significant for us to under­stand that what constitutes an election is more than just the buttons we press.

Running for president starts about 1 year before Election Day. This g

END_OF_DOCUMENT_TOKEN_TO_BE_REPLACED

There are around 6 billion people living on Earth at this moment. Many people believe that in a mere three years the world’s population, all six billion people, will be wiped off the face of the Earth. There are a number of different prophecies and theories that all end with “The End.” The end of the world, that is.
People have always been predicting the Earth’s last year, month, day or even hour however, obviously, none of them have ever come true. June 6th, 2006 was apparently going to be the end of the world because of its symbolic date, 666. And a little over three years a later the Earth still stands. Before that we had the Y2K scare. Violent, planet-wide death was supposed to come with the turn of the millennium.
Unlike many previous so-called dates of the apocalypse many different theories exist that