The Knicks? Setting records? Most basketball fans are well aware of the Knicks’ inability to win games and rise through NBA standings. So how are they setting records? The Knicks have set a team record for most consecutive losses. Outdoing their previous 12 loss streak in 1984-85, the Knicks suffered their 13th loss recently to the Wizards. Although this was just a small part of the NBA season, it is still quite clear that the Knicks are unable to secure any significant amount of wins. Many Knicks fans wonder how this could possibly be happening with their current roster. But analysis from different experts as well as stats, attribute the Knicks’ lack of success to major flaws in their defense.

Another one of the Knicks most damaging attributes include their abysmal free throw stats. Their current 18.8 and previously 15.4 free throw attempts (FTA) average per game nears some of the worst averages in NBA history. Coach Derek Fisher comments on his teams’ lackluster FTA average by saying, “If we can do a better job of defending without fouling, which would put us into the open floor more, into more transition situations, now we can get some guys that are really good for us in those moments to the front of the basket. And also just as they get more comfortable understanding within the offense where the opportunities are to attack and get downhill and be aggressive as opposed to thinking, ‘OK, let’s just stay in the offense.’” He is clearly singling out the Knicks defense as their main setback, linking it to fatal offensive problems as well.

END_OF_DOCUMENT_TOKEN_TO_BE_REPLACED

The BSGE boys basketball team has started this season 2-4. Its two wins already match its win total from all of last year making it the most successful season the team has had.

Mr. Anderson, the boys basketball coach,  seems very pleased with what he has seen so far and is optimistic about this year’s roster. He said “I think we have a lot of depth. We have a lot of players that understand the game and what to do.” The current BSGE basketball team now fields 16 players, of whom 10 are seniors, which explains why the team is stronger this year.

Mr. Anderson has already seen the strengths of the team during the practices held so far. As Mr. Anderson says “Although we are a small team, I think that we are really quick. I think we have a lot of kids that are placed and know what to do. We have a good sense what a team should be like and we have a good team chemistry.” Since most of the players are experienced seniors, they already work well together and have a good base for building team skills.

While the team has strengths, it needs to get better in

END_OF_DOCUMENT_TOKEN_TO_BE_REPLACED

In 2013, BSGE’s two basketball teams had a joint fundraiser.  It lasted from late October to the middle of November.  The fundraiser involved selling clothing such as shirts, hoodies, sweatshirts, jackets, socks, tank tops, shorts, baseball caps and yoga pants.  Non-clothing items, such as cell phone cases, backpacks and watches were also sold.  This is the school’s first fundraiser with Fan Cloth, the company that manufactured these items.  In addition to raising money, the purpose of this fundraiser was to test out the company and see if BSGE could profit from doing business with them again.  This meant that there was no monetary goal.  Even so, the fundraiser made $300, which was used to buy equipment for both basketball teams.  All in all, this was just one of many expected future fundraisers necessary for the sports at BSGE to survive.

Below are pictures from the annual Basketball Dinner held on Monday, 3/11, at Five Napkin Burger in Astoria. Both the Boys and Girls teams were in attendance. (Photo Credit Katelynne C ’14). 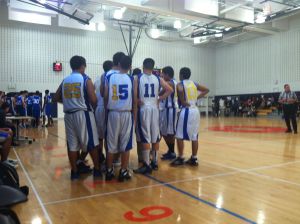 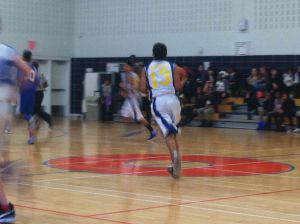 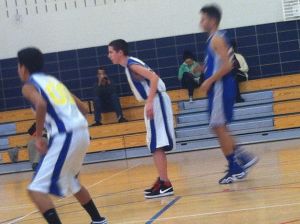 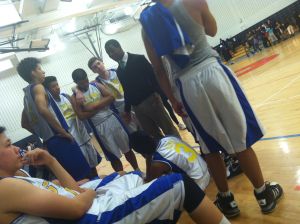 END_OF_DOCUMENT_TOKEN_TO_BE_REPLACED

The BSGE boys basketball team is headed by 7th grade English teacher Mr. Anderson and this year they appear more serious than ever. Their record for the previous school year was 0-14, and yes, they lost all of their games. As an initiative to improve the team, Mr. Anderson has been working with the squad on team chemistry and how they can make their jobs easier on the court. Surprisingly enough, the basketball team won a game this year against Millennium High School on November 23rd. The score was 22-23 with the game’s winning shot made by

END_OF_DOCUMENT_TOKEN_TO_BE_REPLACED

After last year’s tough season, the boy’s basketball team has been working hard to redeem itself and improve. Each practice has been attended religiously by each of the players, and they are eagerly awaiting the upcoming season, for which they all have high hopes. Last season, ‘07-’08, was the team’s first year participating in the PSAL Boy’s Basketball division as an active team. PSAL stands for Public School’s Athletic League, which promotes student athletics. Their goal is to give students opportunities to become educated in physical fitness, sportsmanship and discipline.
Already having begun practices, the boys are clearly putting in the effort to have more wins this year, proving that they want to succeed this season as a basketball team. On a weekly basis the team usually has three practices,

END_OF_DOCUMENT_TOKEN_TO_BE_REPLACED

– BSGE has begun their season 0-7, the second consecutive season they have done so.
– Justin Greene is leading the team in rebounding, notching 19 in his most recent effort.
– Vincent Dillon has the team’s only double-double of the season, also coming in his most recent game, recording 20 points and 11 boards.
– BSGE’s first starting five of the season was Oren Shafir, Vincent Dillon, Justin Greene, Jehan Shams and Malcolm Hackworth.
– BSGE was not allowed to bring any fan support into the Newcomers’ home gym, even while they had over 60 supporters. It’s a fault on the PSAL to disallow opposing fans in away buildings, especially in a league with teams so close to each other. Fans interested in attending BSGE Sting games at the Academy of American Studies/Newcomers building should contact PSAL, as will BaccRag, and inquire this rule’s lack of sensebility.
– BSGE has 14 games remaining, with two games each against Robert F. Wagner and Aviation, both of whom the Sting have already faced.

Three weeks and seven games into the season, BSGE has yet to see a victory. The long and short of this season has been seven losses, all by twenty points of more. Mr. Anderson’s crew, mostly returning players from last year, has struggled to find a flow on the offensive side of the ball, with an overwhelming amount of turnovers to start off the ’08-’09 campaign. After finishing last year with a hard-fought win, the Sting have yet to find their rhythm.
BSGE’s first game of the season was also their first at home; a 31-75 loss. The Sting started off strong on the ball, trailing by only nine in the first quarter. However, the second quarter saw the game get blown open, as

END_OF_DOCUMENT_TOKEN_TO_BE_REPLACED

Vince Dillon, standing a full 6’2 ¾’, has never been given the shot to captain a team, until now. With the loss of last year’s center Josh Valladares, the BSGE Boys basketball team was in need of a leader to take charge this season. Mr. Anderson called upon Dillon as his man. “I’m looking for Vincent, Taylor and Jehan to step up and teach the rest of the team our motto: “Hustle, Leadership, Focus”. Anderson went on to discuss the leadership qualities presented by Vincent last year, and even more so, the progress of his game going from freshman year on to his new role on this ’08-’09 team in his fourth year of BSGE basketball.  Naturally, as any four-year player, Dillon has seen his playing time increase tremendously over the course of his high-school career.
His role as a leader on the team has affected his attitude toward his own game.  “On the court I